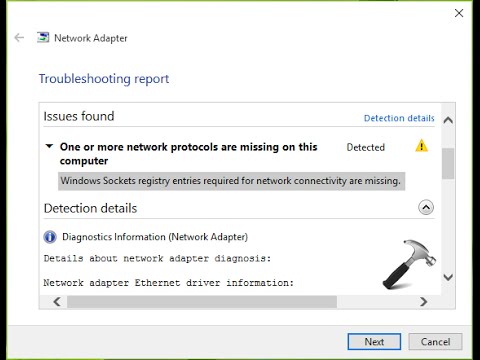 Check to see if your connectivity issue has been resolved. Disable the Proxy Server Sometimes proxy servers are set that are interfering with the protocols. Disabling them will resolve the issue. Check to see if your missing protocols issue has been resolved. Restart Network Adapters Sometimes restarting the network adapters allows the computer to fix the issue. Step 3 Choose the network that is giving you problems and right-click on it.

Step 4 Right-click the same network. You can always repeat Step 3 and Step 4 with all the options if you are unsure which one is the culprit.

Return the Network Components to Their Original State Sometimes resetting the network components will clear up the issue. Press [Enter]. Now, restart your computer, and see if you can connect.

Another list will populate. Step 5 Close the command prompt and restart your computer using the power icon on the Start menu. Check to see if you can connect to the Internet. If you are still having problems, continue reading. Uninstall a Third-Party Antivirus If you are using a third-party antivirus, it is possible that the antivirus is interfering with some components of Windows—including the protocols. Since Windows 10 comes with Windows Defender, first make sure Windows Defender is deactivated if you are running a third-party antivirus.

Press the [X] and [Windows] keys at the same time. Step 3 Click on the Start menu Power icon and restart your computer. Step 4 If the problem is not resolved, reinstall your antivirus and move on to the next method.

Install Network Protocols Yes, the network protocols should already be installed since you once had Internet access. However, if you follow these steps, they will insure the protocols are there and the error exists somewhere else.

Then select Ethernet. If this did not resolve your problem, continue reading. Reinstall the Network Adapter This method will resolve the issue if the Network Adapter is the source of the corruption. Step 1 Press the [R] key and [Windows] key at the same time. Step 3 Close that window, and right-click the same network adapter again. Step 4 The uninstall device warning box will appear. Step 5 Now, restart the computer. The device should automatically reinstall.

Repeat the steps above until you have reinstalled all your network adapters or until the Missing Network Protocols error is gone. If this is the reason for the error, simply disabling the IPv6 protocol will resolve the error.

Step 2 Pick the network that is giving you problems and right-click on it. Release the [Shift] key and your computer should shut down. Wait two minutes before restarting your computer.

Disabling this ability will prevent outside chatter that may be interfering with your connection. Perform a System Restore You had to manually create a system restore point before you began having connection issues to do this method. This method will cause you to lose some of your information, but it should fix the error.

If you want to learn more about turning system restore on, there is a post on how to turn the System Restore feature on and create a restore point here. Step 1 Press the [X] and [Windows] keys at the same time. Your computer should return to the same settings it had before the problem occurred. Sometimes the computer may try to reinstall updates that have been applied.

Make sure you do not interrupt these updates since that could cause the 1 or More Missing Networks error to reoccur.

How To Fix ‘Network Protocol Missing’ Problem On Windows The word protocol is derived from the Greek “protocollon”, meaning a leaf of paper glued to a. When the Troubleshooter finishes, see if you get the missing protocols message. If you do, continue. Networking is a huge part of the Windows 10 experience, and one of the most annoying network problems is the one where Network Protocols.

Solve the Error: One or More Network Protocols Are Missing on This Computer

As long as you don’t mind tinkering, The Dude is a decent network utility that should be worth the download. It’s automatically installed, can’t be un-installed, and is used by default for all networking functions. This reflects the state of networking in the 21st century. Unusual protocols that have been included in earlier versions of Windows Banyan Vines, DLC, etc are no longer available.

Check to see if your connectivity issue has been resolved. Disable the Proxy Server Sometimes proxy servers are set that are interfering with the protocols. Disabling them will resolve the issue.

REVIEW: 14 Different Methods to Solve One or More Network Protocols are Missing Error

Press Windows Key + I to open Settings then click on Update & Security. Missing network protocols after Windows 10 update is a huge pain to some users . You could try the following solutions to fix the network. NetBIOS over TCP/IP is a naming service and session handler used by Windows networks. The protocol allows for computers on a small local network to.